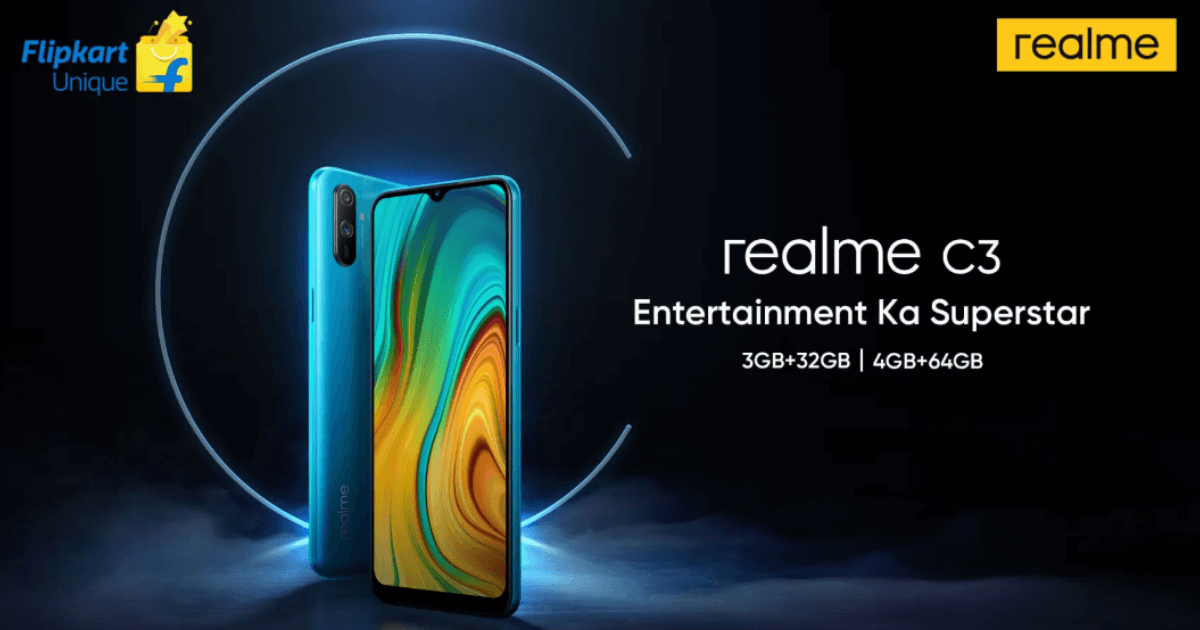 Realme C3 is the successor to the Realme C2 phones from the popular Chinese smartphone maker brand Realme in India. Just like its predecessors in the Realme’s C-Series lineup, Realme C3 is listed on the e-commerce store Flipkart as the top quality smartphone, Realme C3 handsets boast of being an entry-level smartphone having decent aesthetics and good performance.

Also, with its launch tagline – ‘EntertainmentKaSuperstar’, this new C-series variant of Realme, promises to deliver some amazing user experience.

According to the official announcement from the company, Realme C3 smartphones will be unveiled in India at a press event scheduled in New Delhi at 12:30 PM on February 6, 2020.

Realme C3 is expected to be an entry-level budget smartphone, like its predecessors including Realme C1 and Realme C2 smartphones. It’s most likely going to be priced below Rs. 10,000 on Flipkart. Thus, anyone looking for a mid-range handset coupled with some great specifications, this handset can be their best bet.

Realme C3 specifications have already been revealed on the Flipkart page to provide customers with a glimpse into its features before the final launch. Some of the key specifications of Realme C3 include:

The phone comes paired with 3GB+32GB and 4GB+64GB storage variants.

As it’s equipped with a massive 5000mAH battery, Realme C3’s battery backup guarantees non-stop entertainment on the handset, including 20.8 hrs of Youtube streaming, 43.9 hours of talk time, 10.6 hrs of PUBG gaming, and more.

Besides featuring a 6.5” mini-drop IPS LCD Display and a Corning Gorilla Glass front, the Realme C3 smartphone also boasts of a waterdrop notch at the top. It offers a screen resolution of 720 x 1600 pixels and a pixel density of 270ppi.

It’s anticipated that Realme C3 is going to include Realme UI with Android 10 out-of-the-box.

There are many decent unboxing videos of Realme C3 on the Youtube that you can check out by visiting links like the one given here: https://www.youtube.com/watch?v=vU42Y8Ydc38

If you are interested in purchasing the amazing Realme C3, you can look for a cool back cover that will compliment your handset. Choose an elegant design that’s not only appealing but also highly durable.

It will ensure that your device always remains protected without compromising on its looks. Check out some of the best buy links below for great deals on Realme C3 back covers.