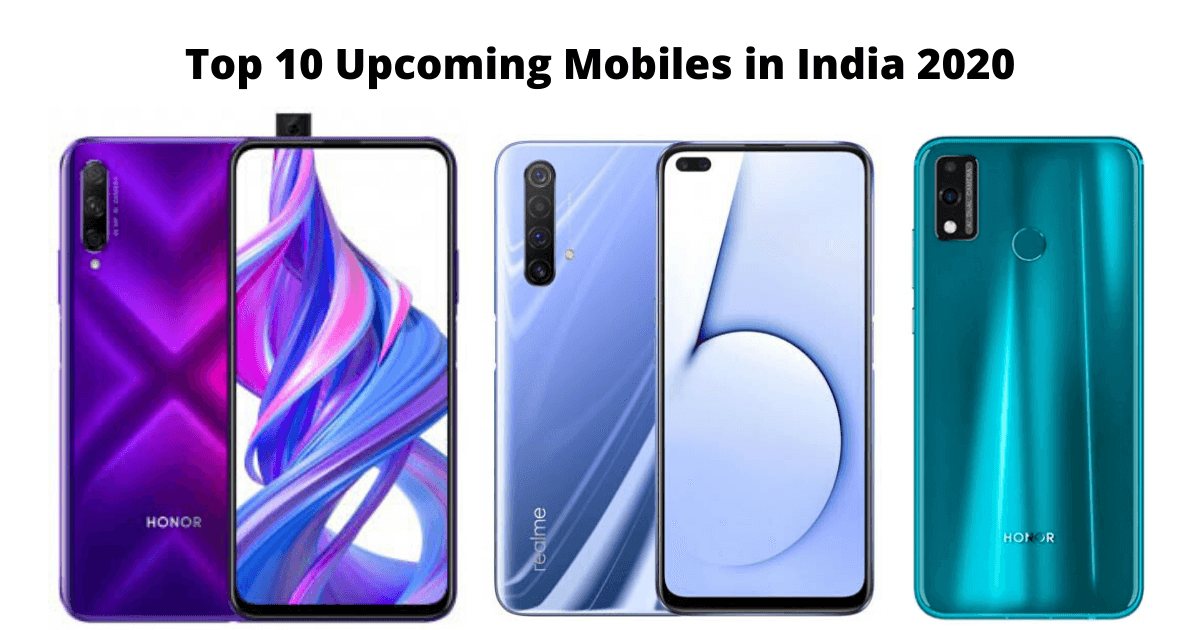 Sadly, Mobile World Congress (MWC) 2020 conference is canceled due to Corona Virus but still, a handful of phones are all set to be launched in India in the coming weeks.

Here’s a list of 10 smartphones that will be launched in India in February, March and April 2020:

Realme X50 Pro is supposed to be launched on February 24th, the same day it will be launched globally in Madrid. It will be the first 5G smartphone in India. It will be available for on Flipkart flaunting super AMOLED display, the refresh rate of 90 Hz and dual selfie camera with elongated punch hole.

Along with that, it has a quad-core camera with 64MP Sony IMX686 as the primary sensor. Paired with it are a telephoto lens and a wide-angle lens supporting 20x hybrid zoom. The front camera of the phone will have a 32MP shooter that you can use for selfies and video calling. The news on the street is it will support the all-new 65W SuperDart fast charging that will enhance its battery life and keep its thermal in check. And that will be priced around Rs. 50,000 approximately.

The sub-brand from Huawei will globally launch Honor 9X Pro on 24th February. Like the Chinese variant, this one will also be powered by HiSilicon Kirin 810 SoC. It won’t have pre-loaded Google apps since it will come with Huawei mobile services. 9X pro will the first HMS based smartphone and it is rumored to be priced at Rs. 22,000 approximately.

It has 6.59” full HD display, 6GB RAM and 128 GB storage. It houses a triple rear camera of 48MP, 8MP, and 2MP along with a 16MP selfie camera. It runs on a 4,000mAh battery that supports fast charging and EMUI 10 OS processor based on Android-10. 9X Pro also sports a rear fingerprint scanner and various connectivity options like- 4G VoLT, Bluetooth 5.0 LE, dual-band Wi-Fi, USB Type-C, and GPS + GLONASS.

On February 25th, Vivo’s spin-off brand iQOO will be launching its gaming-centric smartphone, the best one from what we have heard. iQOO 3 will be powered by Snapdragon 865 chipset, the flagship of Qualcomm along with 5G connectivity. It will sport a 6.44-inch Full HD AMOLED display, a tall 20:9 aspect ratio, 12 GB RAM, and a 90Hz refresh rate.

The launch date for Samsung Galaxy M31 clashes with iQOO 3, February 25th. If you are looking for a budget phone with massive battery life, this is your phone. Likely to be priced at Rs. 16,000 approximately, M31 will flaunt 6000 mAh battery. The smartphone will be powered by in-house Exynos 9611 SoC and with 64 GB RAM and 128 GB storage. And it will run on Android 10.

Rumors have it that Samsung Galaxy M31 will sport new improved cameras. It will sport quad rear camera with the primary sensor of 64 MP, a depth sensor, an ultra-wide-angle lens coupled with a macro lens. On the front, it will have a 32 MP snapper replacing the 16 MP shooter for video chats and selfies.

Already launched in China, this one is truly a camera phone. Said to be priced at Rs. 51,000 approximately, the takeaway feature of Xiaomi MI Note 10 Pro is its 108 MP camera with an 8P lens coupled with OIS, EIS, and many AI enhancements. Its quad rear camera setup also includes a long telephoto lens that supports 10x hybrid zoom, 12MP 2x telephoto for portrait shots, and 20MP ultrawide angle snapper. The selfie camera is 32 MP with f/2.0.

Other than that, Note 10 Pro comes with a 6.67” screen with AMOLED Full HD screen and curved edges. The display is coupled with a 180 Hz touch sampling rate and a 90Hz refresh rate. And it has 4,500 mAh battery. The tentative date for its launch is 27th February.

All set to be launched on 29th February this year, Reame 6Pro has created quite a buzz. It is rumored to be coming with a five-camera system and Snapdragon 730. The four-camera setup will be like the Realme 6- 64MP primary sensor, 8MP ultra-wide-angle lens, and 2MP macro lens and a depth sensor both for portrait shots. The fifth camera is most probably going to be a dedicated zooming lens. And at the front, there will be a 20MP selfie camera.

Its Snapdragon 730 chipset will be coupled with an octa-core Kryo 470 processor with a dual-core and a Hexa Core delivering the clock speed of  2.2GHz and 1.8GHz respectively. The Li-ion 4,500 mAh battery is supported with VOOC fast charging. It will be priced approximately at 15,000. You can say it is a camera phone in the budget.

Expected to be launched on March 6, Samsung has skipped 9 numbers and went straight to S20 from S11. With S20, Samsung ditched the headphone jack entirely and is available with 5G support. It has a perfect 6.7” Dynamic AMOLED 2X Infinity-O display. With a 120Hz refresh rate. It has the highest absolute color accuracy and has its performance and calibration accuracy called a textbook perfect.

It is also a perfect camera phone with a triple or quad rear camera. Their arrangement is similar to Pixel 4 from Google and iPhone 11 Pro. It has a 12MP ultrawide lens, 12MP wide lens, and 64 MP telephoto combined with a 10MP front camera. And it has a 4,500 mAh battery. This smartphone is also expensive with an approximate price of Rs. 74,000.

The 6.53-inches Super AMOLED display of Xiaomi Mi Note 9 Pro is coupled with Corning Gorilla Glass 6 screen protection. It will have a quad-camera setup at the rear with 64MP primary sensor, 8MP wide-angle, and 2MP macro capture and depth sensor both. And it has a 20MP selfie camera. The cameras are said to have the ability to capture high-quality images.

Mi Note 9 Pro comes with a powerful octa-core processor with Snapdragon 730G chipset. Its 2.2GHz Dual-core and a 1.8GHz Hexa core units give you the ability to multi-task freely. And its 4,500 mAh battery gives it a long life. It supports 64GB RAM and 256GB of internal storage. It is said to be priced approximately at Rs. 16,000 and will be launched on March 14. So, if you are looking for a phone that is pocket-friendly, lasts long and allows you to multi-task, this is the best one.

OnePlus 8 Pro is due to be released around 3rd April tentatively and is said to be running on Android 10. It will be powered by Snapdragon 865 and will be flaunting 6.55-inch AMOLED Full HD punch-hole display. The leaked design shows that OnePlus 8 Pro will be one of the best sets of cameras. So, you can expect it to be one of the best camera phones in India.

Priced at approximately Rs. 57,000, it will sport dual selfie camera with 32 MP Primary Camera and triple rear camera of 64MP + 16MP + 13MP along with digital zoom. It also has features like auto face detection and touch-to-focus. And it is backed by a 4500 mAh battery.

Along with 9X Pro, Honor is also introducing 9X lite likely on April 9th priced approximately at Rs. 12,000. It flaunts a 6.50-inch display and is powered by an octa-core HiSilicon Kirin 710 processor coupled with 4GB RAM. 9X lite runs on Android 10 and has a 3750mAh battery.

It has a 48-megapixel primary camera supported by f/1.8 aperture coupled with a 2-megapixel secondary camera. It also has a 16MP selfie camera with an f/2.0 aperture. It runs on EMUI 9 that is based on Android 10  and comes with 128GB memory. And it only weighs 175 grams. So, if you are looking for a lightweight smartphone in the budget, go for 9X lite.

These are 10 smartphones that will be launched in February, March and April 2020 in India. They will be adding a lot to the competition and you will have many more options to buy the kind of phone you want at the price you can afford.

It will be getting a little tough to choose but studying the specifications carefully will give you an idea of what exactly you need in your smartphone. Wait for them to launch. Some are even available for pre-booking on Flipkart. Don’t wait too long.